CO2 rises are at an all time high

This article is more than 1 month old 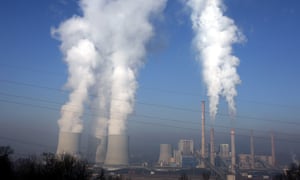 The concentration of carbon dioxide in the atmosphere has increased by the second highest annual rise in the past six decades, according to new data.

Atmospheric concentrations of the greenhouse gas were 414.8 parts per million in May, which was 3.5ppm higher than the same time last year, according to readings from the Mauna Loa observatory in Hawaii, where carbon dioxide has been monitored continuously since 1958.

Scientists have warned for more than a decade that concentrations of more than 450ppm risk triggering extreme weather events and temperature rises as high as 2C, beyond which the effects of global heating are likely to become catastrophic and irreversible.

May is the most significant month for global carbon dioxide concentrations because it is the peak value for the year, before the growth of vegetation in the northern hemisphere starts to absorb the gas from the air. The seasonal peak and fall can be seen in the Keeling curve, named after Charles Keeling, who started the observations on Mauna Loa because of its isolation in the Pacific Ocean.

This is the seventh consecutive year in which steep increases in ppm have been recorded, well above the previous average, and the fifth year since the 400ppm threshold was breached in 2014. In 2016, the highest annual jump in the series so far was recorded, from 404.1 in 2015 to 407.66 in 2016.

As recently as the 1990s, the average annual growth rate was about 1.5ppm, but in the past decade that has accelerated to 2.2ppm, and is now even higher. This brings the threshold of 450ppm closer sooner than had been anticipated. Concentrations of the gas have increased every year, reflecting our burning of fossil fuels.

Ralph Keeling of the Scripps Institute, and the son of Charles, said: “The CO2growth rate is still very high – the increase from last May was well above the average for the past decade.” He pointed to the mild El Niño conditions experienced this year as a possible factor.

Tuesday’s findings come from Mauna Loa and the US National Oceanic and Atmospheric Administration, which has also made complementary independent measurements of greenhouse gas concentrations since the 1970s. NOAA’s Barrow observatory on Alaska’s North Slope showed an average of 417.4ppm over the period, but the Arctic typically has higher CO2readings than the Mauna Loa series.

Pieter Tans, a senior scientist at NOAA, said: “It is critically important to have these accurate long-term measurements of CO2 in order to understand how quickly fossil fuels are changing our climate. These are measurements of the real atmosphere, and do not depend on any models, but they help us verify climate model projections, which if anything have underestimated the rapid pace of climate change being observed.”

7 Ancient site that all have an extraterrestrial link

Did aliens build the pyramids?